It is a week for song stylists that have meant a lot ot me. I mentioned Mabel Mercer yesterday when I posted about Nancy Wilson.  Now I’m giving Mabel a day of her own.

I was introduced to the  albums of Mable Mercer when I was about 16 by my first mentor, Frank Hains. I write a lot about Frank in my first memoir Mississippi Sissy.  He was the arts editor of the Jackson Daily News and wrote a daily arts column.  He was also a set designer for New Stage Theatre and Millsaps College, both in Jackson.   He directed and designed for the Vicksburg Little Theatre as well.  I first met Frank at a closing night cast party for a New Stage productio of A Midsummer Night’s Dream which Franik was throwing at his rather modest center hall antebellum home – big porch, not columns – next to Millsaps and across from Jackson’s lone Jewish cemetery.  Everybody called it Bleak House I found out that night because it was so dilapidated on the outside but  once you got inside you discovered it had been renovated and decorated with elegance and simplicity.  I was taken to the party by a friend from my hometown who knew Frank because his best friend has been his roommate before he moved ot New York.  I would eventually rent that same room the summer before I too moved to New York to attend the Drama Division of The Juilliard School.  It was Frank who convinced me to audition and gave me the plane fare to New York.  I would find Frank murdered that summer I lived with him.  The story of my friendship with Frank and his murder and my being used as the prime suspect to flush out the real one and my going home for their trial my first semester at Juilliard is one of the main narrative threads of Mississippi Sissy.

The story ended tragically but it began with such joy the night of that party.  I had never been to one like it.  So full of witty, smart, stylish, and, okay, dramatic guests.  I had an instant feeling of home.  These were ny people.  I had even just won the Best Actor award at  Mississippi’s state wide drama festival for my role inmImpromptu, a one-act by Tad Mosel. These were my people.  When Ivan Ryder,  New Stage’s artistic director, heard that when I was introduced to him at the party he told me I had the exotic look he was looking for in Toby, the mute boy, in Menotti’s one-act opera The Medium.  The next week I drove the 40 miles back to Jackson, audiotioned, and got the part.  I will always be thankful to my grandparents for allowing me to rehearse and perform in that production for the next six weeks while going to high school

I’m pretty sure Frank played some Mabel Mercer that night since Eudora Welty, who was his great friend was inspired by it.  I  was sixteen and at a party, the youngest person there but but I was there, by God, and holding my own with Eudora Welty and gay people and theatre folks and writers.  Miss Welty  was holding her own too over on the sofa  with  two or three of her buddies when she began to do her Bea Lillie imitation, joining Mabel as she finished her perfectly pronounced version of “I Went to a Marvelous Party” by Noel Coward.  When Miss Welty went right into Coward’s “Camp-Fire Girl,” she faltered a bit on the lyric after too many glasses of Makers Mark.  Frank told me that when Eudora faltered on a Noel Coward lyric that was a signal to cut her off and start shepherding her home.  He asked me to drive her back gthe few blocks where she lived in the Belhaven section of town  and he’d take her Ford Fairlane parties like this began that night none has quite equaled the thrill of this first one and discovering there were, in fact, people like me in the world.  That was the night I began to feel less alone.  That I could actually belong in the world.

Part of belonging was owning my being gay.  At the party a handsome man was flirting with me and I didn’t want to miss out on him so I asked Frank if maybe someone else could take Miss Welty home.  “The man will be here when you get back.  Do as I say. Drive Eudora home.  Someday you will write about it.”  And there it was.  Frank’s act of kindness to Eudora was alos on to me for he saw me that night, really saw me, and was the first one to cut me out of the herd to join his fold because all the things about me that made me insecure were the ones that he would come to tell me were the ones that made me special.

When Miss Welty and I got to my car – all the time she was humming that Noel Coward ditty that Mabel Mercer had sung – I realized the front seat was a mess.  i had just thrown my gym clothes there after my work outs all wee.  They reeked.  By the time I got around to the driver’s side, I witnessed Miss Welty gently lifting my dirty jock strop and putting it on the back seat so she could take her seat next to me.  I apologized but she made a little joke. When people ask em to describe my writing, I return to that moment and tell them the best way to sum it up is Eudora Welty holding a jock strap.

It took me a while to warm up to Mabel Mercer.  Frank gave me a treatise about why she was so brilliant that summer I moved in with him and I had to get accustomed to her voice around the house since he played her so often.,  I knew I had to claim to like her to seem sophisticated.  I was smart enough to know that.

When I got to New York and Juilliard, I fell for a straight guy in my Group.  We called our classes Groups there.  I was in Group 8.  He fell for me enough that we had an affair until his girlfriend came to live with him.  They got married and have been married every since. They have children now older than we were when we fell for each other in 1975 those first heady month s at Julliard made headier by what we were feeling.  On one of our first real dates, I suggested we go see Mabel  Mercer at the St. Regis.  I only ate one meal a day for a week so I could afford it. And even before we got to the St. Regis  an incident occurred that would prove how heightened the narrative of my life in New York was from the start.  On our walk over to the St. Regis from the Upper West Side, we stopped and took a little private tour of The Plaza Hotel.  On our way out of the Plaza, a young African American guy stopped us and told us a that he was in New York for the weekend from Harvard and had been mugged in  Central Park and was trying to get train fare back to Cambridge the next day.  My friend gave him 20 dollars.  I didn’t quite buy his store, plus I needed  my 20 dollars for this date. In 1990, John Guare’s Six Degrees of Separation opened.  I was reading a story about the kid on whom the play is based.  His name was David Hampton.  He was the same guy who told us he was mugged and needed train fare.

When we got to the St. Regis and and settled in for the show and our grown-up lives, I finally understood Frank’s love of Mabel Mercer.  Seeing her live explained it all.  Or maybe my love for this guy was all the added ingredient I needed .

john S. Wilson in his review of her in The New York Times wrote: “

“New York is a better place to be this week than it was last because Mabel Mercer is back in town and in a room she has immediately made her own.

“She has moved into the St. Regis Room, off the lobby of the St. Regis Sheraton Hotel, which has, for the last year, been an enclave for guitarists. Simply through her presence— seated regally erect, as usual, in a small armchair, wearing a black dress, a long fuohsia scarf floating around her, her hands folded in her lap—Miss Mercer creates an aura that transforms the room.

Her songs are a compound of many elements—a glance, a shrug, a sudden smiling gesture, as well as a resilient, expressive voice that sometimes quavers on the edge of an abyss, sometimes bites into a word with joyous relish (the levels of meaning that she can imply by simply enunciating the letters ‘P.T.A.’ are startling). She is, primarily, an actress, a teller of tales, a weaver of moods and spells.”

I cherish that night at the St. Regis.  I cherish the love affair I had with that guy.  I cherish Frank Hains who taught me so much but his first lesson was about Mabel Mercer. I now realize all the others lessons came from that one.

I couldn’t find a photo of Mabel wearing one.  Nor her buddy Bobby Short with whom she sometiimes performed.  No luck with Cole Porter or Noel Coward or Hoagy Carmichael. Then I remembered Ernest Hemingway was an early fan of hers when she was the toast of Paris in the 1930s along with Gertrude Stein, F. Scott Fitzgerad, and Porter. 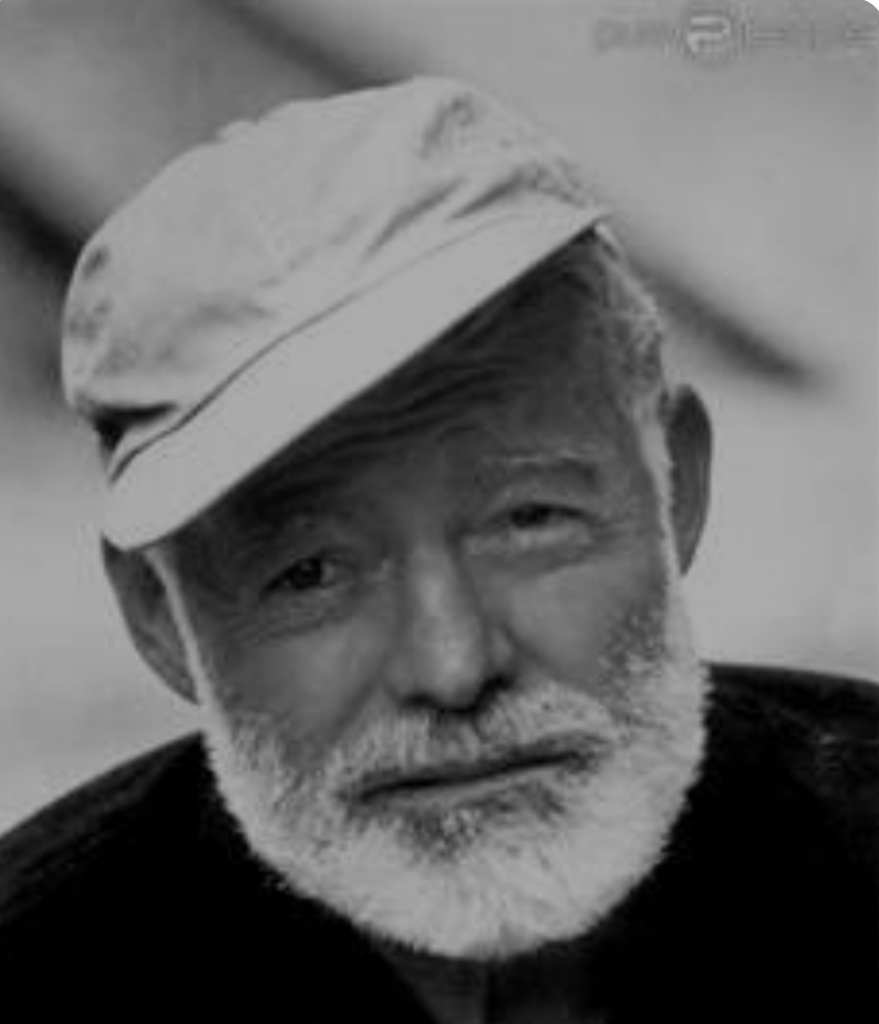 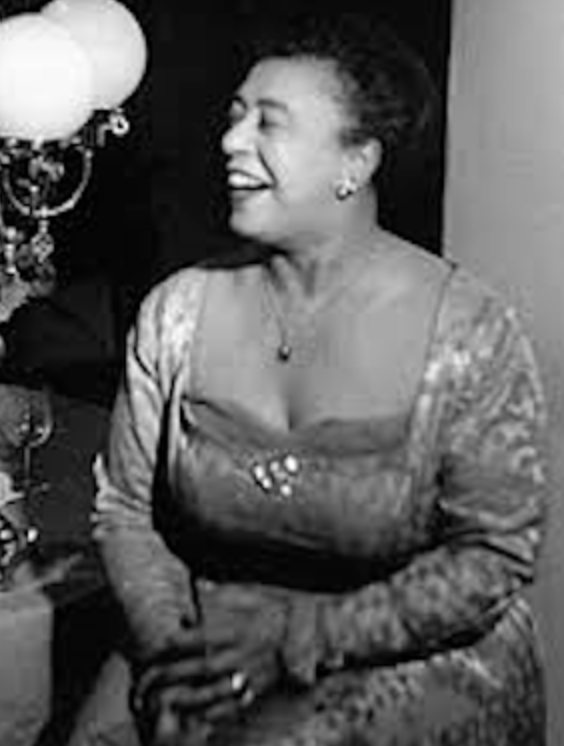